For a day, a weekend or a short break, our private excursion will drive you to an “out of time” and commemorative immersion from Omaha Beach to Utah Beach.

Welcome to the D-Day landing beaches in the department of Calvados in Normandy, located in the north-west of France, 4 hours' drive from Paris. On the early morning of 6th June 1944, tens of thousands of Allied soldiers landed on Normandy’s beaches: it was the greatest invasion in our history to begin the liberation of Europe from years of Nazi occupation.

Your private chauffeur will drive you to the D-Day landing beaches with a few stops which marked the Second World War, like Pointe du Hoc, where you will meet your English-speaking guide who will accompany you all day long.

From Pointe du Hoc to the famous Omaha Beach, your dedicated guide will make you discover a few other historical sites like the American Cemetery located in Colleville-sur-Mer, the German artillery battery in Longues-sur-Mer and the seaside town of Arromanches in order to learn more about the history of this period. 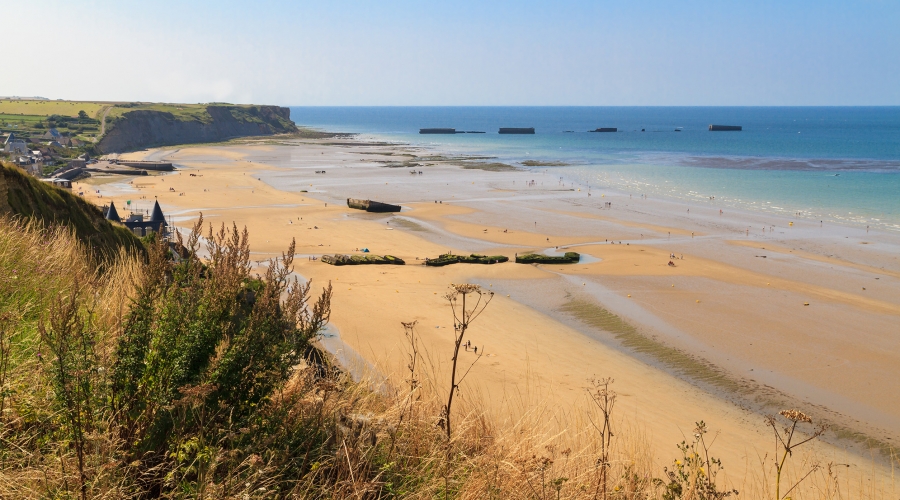 Your private visit of the landing beaches with a private guide

The landing beaches are freely accessible and during your day, you will discover all the history of the landing operations thanks to your English-speaking guide in order to better understand the History of the D-Day Landings in Normandy and to honor American, British forces and other allied troops.

You will do a first stop at the Pointe du Hoc, located in Cricqueville-en-Bressin which is the most important and strategic area between Omaha and Utah beaches where you will discover a fortified site with artillery battery, firing command posts, shelters and casemates.

Then, your chauffeur will drive you to Omaha Beach which is one of the « must-see » sites in commemoration of the historical date of 6th June 1944 and to the followed Battle of Normandy.

After your lunch in Omaha Beach or in surroundings, you will be carried to the historical and famous site of the American cemetery located in Colleville-sur-mer overlooking Omaha beach. With its nine thousand individual white crosses dedicated to American soldiers who lost their lives on D-Day events, you will be surprised by the tranquility of this historic place. Your guide will accompany you during the visit.

Then, your driver will drive you to other vestiges of the Second World War with the visit of a German battery located (in Longues-sur-Mer) which played a strategic role during the Normandy Landings on June 6th 1944. Then, you will enjoy a visit in the beach resort of Arromanches with its remains of a port which linked with the liberation of Western Europe after D-Day.

Depending on your wishes, we can recommend you other stops such as the Caen Memorial to learn more about history of the region.

A private chauffeur (French and English-speaking) will be at your disposal to ensure you the best conditions to drive you from Paris to the different sites of D-Day Landing Beaches in Normandy. Enjoy a private ride in a high-end vehicle, adapted to your needs (sedan or up to 7-seater van depending on the number of passengers) and fully equipped to provide the greatest comfort (air-conditioning, bottles of water to freshen up, a Wi-Fi Internet connection, a child seat or booster seat if needed etc). Your pick-up and drop-off will be ensured at your hotel or in another place in Paris.

A fully licensed English-speaking guide (speaking English, Spanish or other foreign language) will accompany you when you will arrive on the first stop planned in Normandy and also during your tour in the different sites. Your private guide knows perfectly the region, its heritage and its history and will share with you its knowledge.

Visiting hours and duration can be adapted according to your preferences.

Our fleet of vehicles

All our vehicles meet our clientele’s highest expectations. They are serviced and maintained regularly to guarantee comfortable and safe trips with no compromises.

Your itinerary will be commented by a fully licensed English-speaking guide who will be on board in the vehicle and will accompany you throughout your tour in Paris. Your private guide can get off the vehicle with you, suggest you several stops and guide you to some specific places and in the monuments according to your wishes.

Your itinerary is commented by your driver who can share with you some explanations on the monuments, neighborhoods in Paris and suggest nice addresses according to your preferences. But his explanations will not be as detailed as with a private guide. Your driver's missions are to drive you safely and to stay focused on the streets of Paris.

To ensure availability, payment is done in advance, when booking. Our payment methods offers two solutions :

Any modifications of our tours are possible, depending on availability. In case your tour includes entrance tickets or a licensed guide in addition to the driver, which we must pay in advance, they cannot be changed nor refundable.